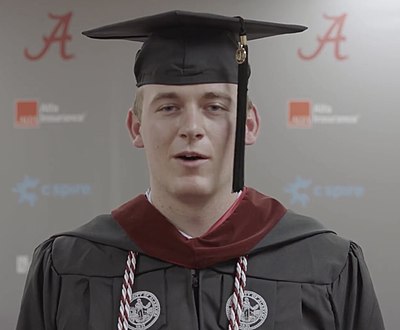 Alabama redshirt junior quarterback Mac Jones was named the 2020 winner of the Manning Award, which is presented by the Allstate Sugar Bowl to the top quarterback in the nation.

The Manning Award, now in its 17th year, was created by the Sugar Bowl to honor the college football accomplishments of Archie, Peyton and Eli Manning. It is the only quarterback award that takes into consideration the candidates’ bowl and playoff performances in its balloting. The award is voted on by a panel of local and national media, as well as each of the Mannings.

“It was quite a year for Mac Jones and the Alabama football team,” said Archie Manning in a release. “We had a lot of outstanding quarterbacks around the country, but I don’t think any player directed his offense as efficiently and as effectively as Mac. The Crimson Tide’s performance all year was so impressive; and seeing them roll to wins in the Rose Bowl and the CFP Championship really showed what an amazing team they have put together. And a lot of credit for that goes to Mac, who bided his time before taking over and showing the country what he could do.”