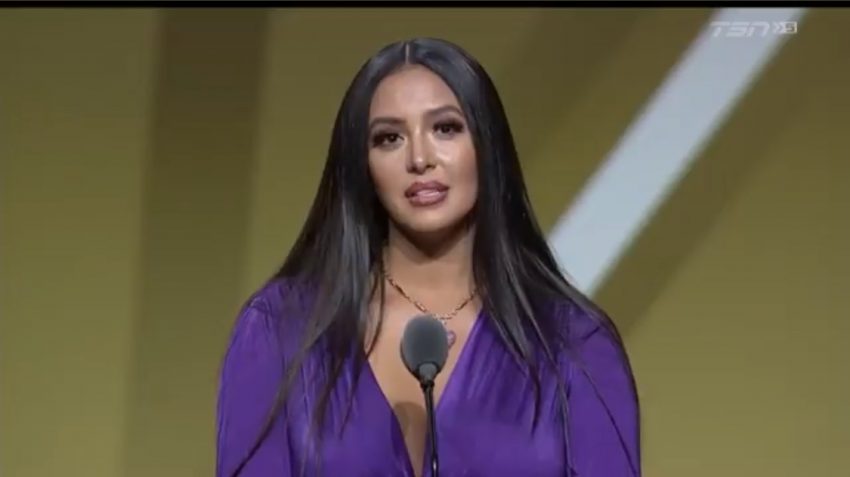 Vanessa Bryant spoke on her late husband Kobe Bryant’s behalf as the iconic basketball player was inducted into the Naismith Memorial Basketball Hall of Fame.

“Last February, I called Michael and asked if he would introduce Kobe tonight and he graciously accepted. Thank you for being here, Michael. Kobe admired you, this means so much to us,” Vanessa told Michael Jordan, who presented Bryant into the Hall of Fame.

“I used to avoid praising my husband in public because I felt like he got enough praise from his fans around the world and someone had to bring him back to reality. Right now, I’m sure he’s laughing in heaven because I’m about to praise him in public for his accomplishments on one of the most public stages. I could see him know, arms folded, with a huge grin saying, ‘Isn’t this some s—?’ He’s still winning,” Vanessa said.

“I wish my husband was here to accept this incredible award. He and Gigi deserve to be here to witness this. Gigi would be so proud to watch her daddy get enshrined in the Basketball Hall of Fame. I know Kobe was looking forward to being here. He asked the Hall of Fame to specifically add a sixth ticket for Capri, he was so happy,” the Bryant matriarch continued.

“He didn’t really talk about upcoming awards but he did mention this one a week before he and Gigi passed. My husband and I were sitting on our kitchen island, and he and I had a conversation about my mother[in-law] and father-in-law attending tonight’s enshrinement. I invited my mother[in-law] and father-in-law to tonight’s enshrinement to thank them one of the most amazing human beings into this world. Pam and Joe, thank you for raising Kobe to be exceptional. Thank you to all of Kobe’s family. Sharia, you’ve gone above and beyond. I love you,” Vanessa said about his sister-in-law.

“There will never be anyone like Kobe. Kobe was one of a kind. He was special, he was humble off the court but bigger than life. To all of our close friends and family that have been present for my girls and I, thank you. That list is long and it takes a village but know that your kindness and love does not go unappreciated. I know that Kobe is thankful that you’re all coming through for his girls. We love you and are forever grateful for you,” Vanessa said as close friends LaLa Anthony, Ciara, Russell Wilson and Sabrina Ionescu were seen in the audience.