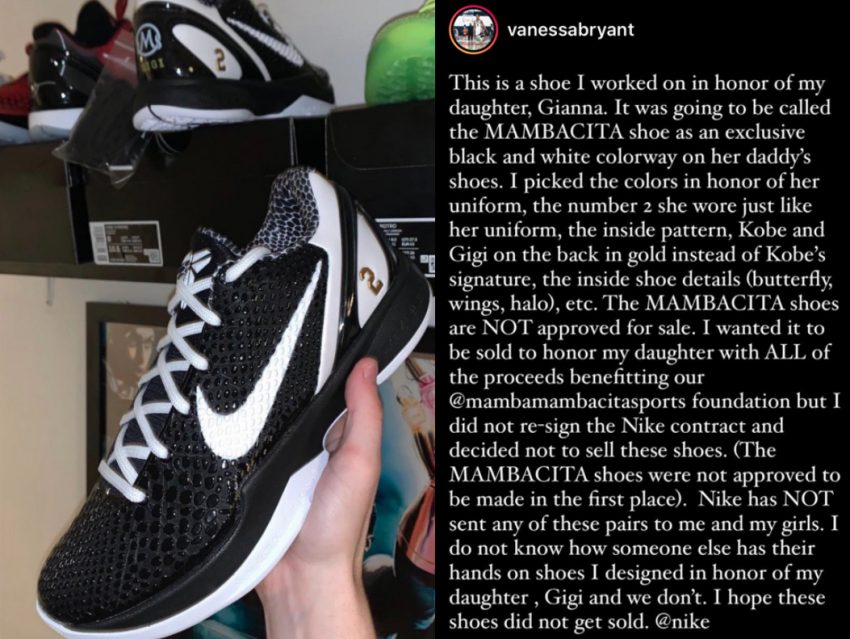 Los Angeles Lakers legend Kobe Bryant had many signature shoes over the years, and it seems Vanessa Bryant worked on a special Kobe shoe in honor of Gianna that was going to be released by Nike. However, Vanessa recently didn’t re-sign the contract with Nike, so this Mambacita shoe wasn’t supposed to see the light of day.

As noted in Vanessa Bryant’s post, this Mambacita shoe was supposed to be a special colorway for one of the Lakers legend’s shoes. It had multiple unique touches to honor Gianna, including the colors themselves to match her uniform, her name alongside Kobe’s and different symbols (butterfly, wings, halo).

Vanessa has no idea how these shoes were made and how they got in the hands of somebody else. They were not approved to be sold or even made in the first place. She recently decided not to re-up with Nike amid her frustrations with the company and how they were handling Kobe’s shoe releases. It seems her frustrations will only grow louder.

“If someone can share how they have these shoes in their possession, that would be great because my daughters and I don’t have any of Gigi’s MAMBACITA shoes.” pic.twitter.com/WFBFjX1kn3

Vanessa Bryant says she did NOT approve the “Mambacita” Nike Kobe 6 Protro to be made. 😢 pic.twitter.com/739LhYdqo0