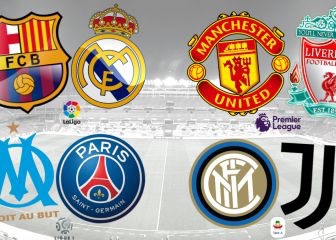 Every season there is rivalry weekend across European soccer leagues that stem for several years. The biggest rivalry in Europe is El Clasico between Barcelona and Real Madrid. The rivalry comes about as Madrid and Barcelona are the two largest cities in Spain, and they are sometimes identified with opposing political positions, with Real Madrid viewed as representing Spanish nationalism and Barcelona viewed as representing Catalan nationalism.

Manchester City vs Liverpool is considered the biggest game in English football and one of the biggest rivalries in world football. The rivalry has been fuelled by the proximity of the two major cities that they represent, their historic economic and industrial rivalry, significant periods of domestic footballing dominance and European success, and their popularity at home and abroad, as two of the biggest-earning and widely supported football clubs in the world.

Inter vs Juventus or Derby d’Italia, are the two biggest clubs in Italy.

Le Classique is the name given in football to the rivalry between French professional clubs Paris Saint-Germain and Olympique de Marseille. Equivalent to Spain’s El Clásico, the fixture is the biggest rivalry in France and one of the greatest in the world. The level of animosity is such that it extends outside of the pitch. Both sets of fans have been clashing against each other almost since the very first encounters between the two sides.