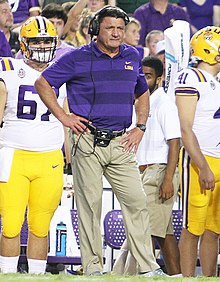 LSU’s Ed Orgeron was on ESPN’s Marty & McGee called the expansion College Football Playoff expansions 12 teams “inevitable” and saying he is fine with a change that helps the Tigers reach the playoff.

“I think it’s coming,” Orgeron said. “Here’s what I’ve learned: As the older you get, you have to adapt. This game is changing, recruiting is changing, things are changing fast. We just have to adapt. Hey, if they expand, then good. It gives us a chance to get in.”

Under the 12-team format proposed by a CFP subcommittee Thursday, the bracket would include the six highest-ranked conference champions and the next six highest-ranked teams as determined by the CFP selection committee. There would be no limit on the number of participants from a conference, and no league would qualify automatically.