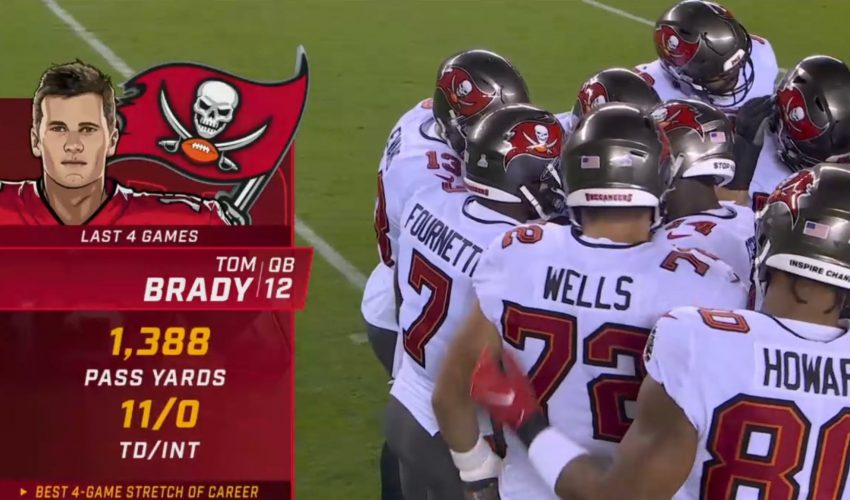 Tom Brady and the Tampa Bay Buccaneers survived a late Philadelphia Eagles comeback attempt, capping off a dominant night which Brady completed 81 percent of his passes with a bad thumb en route to a 28-22 victory Thursday night. Brady had two touchdown passes and Leonard Fournette had two touchdown runs in the victory — as Tampa Bay retains its commanding NFC South lead with the win.

Brady and the Buccaneers took a 28-7 lead on Fournette’s touchdown run with 5:47 remaining in the third quarter. From there, Philadelphia tried to come back through the legs of Jalen Hurts and Miles Sanders. Hurts rushed for two touchdowns in the second half, giving him five touchdowns on the season — the first quarterback in Eagles history to have five touchdown runs in the first six games. Hurts had an abysmal night throwing the football, completing 12 of 26 passes for 115 yards with a touchdown and an interception, but he did finish with 10 carries for 44 yards. His second touchdown run came with 5:54 left in the game, but the Eagles never got the ball back after Hurts completed a two-point conversion pass to Quez Watkins to make it 28-22.

Let FKD help you get ready with Bucs @ Eagles tonight on @PrimeVideo!

Follow+RT for chance to win a $25 Giftcard to your favorite Pizza Shop! (Ends @ 4pm PT!)

You can watch game tonight for FREE via: https://t.co/wKlIW5P3wc