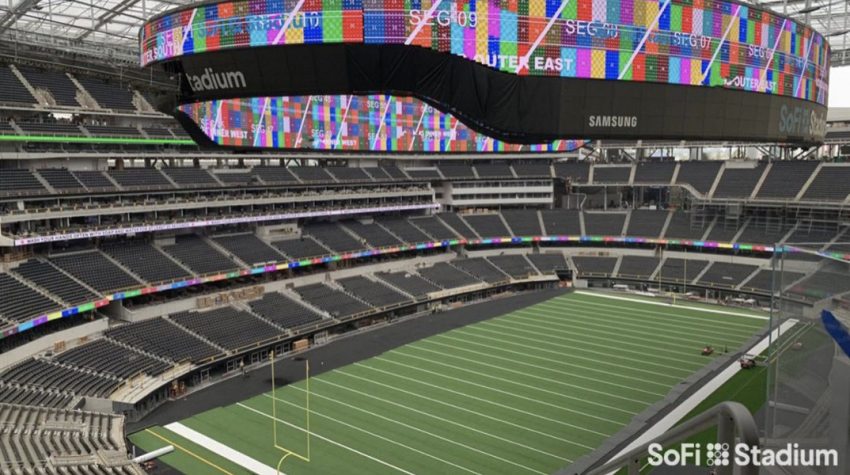 The National Football League announced Wednesday that SoFi Stadium’s Oculus video scoreboard is now complete. The 360-foot, double-sided 4K video board weighs roughly 2.2 million pounds and features 70,000 square feet of digital LED lighting. The scoreboard also has more than 260 speakers included in the structure, according to the NFL.

The Rams declined to provide the cost of the scoreboard when reached by CNBC. Built in 2009, Cowboys owner Jerry Jones’Â video board at AT&T Stadium cost $40 million.

Before the Rams’ scoreboard,Â the Atlanta Falcons claimed to have the largest video board in professional sports at the $1.5 billion Mercedes Benz Stadium. In 2017, the National Hockey League’s New Jersey Devils, owned by Apollo Global Management co-founder Josh Harris, touted that it built the largest in-arena scoreboard at the Prudential Center.

SoFi Stadium is a stadium and entertainment complex under construction in Inglewood, California, United States. It is located at the former site of the Hollywood Park Racetrack, approximately 3 miles (4.8 km) from LAX, immediately southeast of The Forum.
Planned to open in July 2020, the stadium will serve as the home for the Los Angeles Rams and Los Angeles Chargers of the National Football League (NFL). It also serves as the home of the LA Bowl. It is scheduled to host WrestleMania 37 on March 28, 2021. It is also scheduled to host Super Bowl LVI in February 2022 and the College Football Playoff National Championship in January 2023. During the 2028 Summer Olympics, the stadium is expected to host the opening and closing ceremonies, soccer, and archery.
SoFi Stadium will be the third stadium, and second to be in current use, since the 1970 AFL–NFL merger to be shared by two NFL teams (MetLife Stadium, in East Rutherford, New Jersey, is home to the New York Giants and New York Jets, as was its predecessor, Giants Stadium). It will be the fourth facility in the Los Angeles area to host multiple teams from the same league as Staples Center is home to both of the city’s National Basketball Association (NBA) teams, the Los Angeles Clippers and Los Angeles Lakers, Dignity Health Sports Park for a time hosted both the LA Galaxy and now-defunct Chivas USA of Major League Soccer, and Dodger Stadium hosted the Los Angeles Dodgers and Los Angeles Angels from 1962 to 1965.
The facility is a component of Hollywood Park, a master planned neighborhood in development on the site of the former racetrack. Hollywood Park Casino re-opened in a new building on the property in October 2016, becoming the development’s first establishment to open. – READ MORE »